That morning the unknown was approaching and I could feel the wings of butterflies in my belly.  As I went through the rectangular doorway into the school and up the stairs the roar of children grew louder.  The smell of bread or cookies baking in the oven.  Where did it come from?  I could see myself in the granite tile.  Rectangular proclamations of triumph and praise hanging on the walls.  I hiked up to the third floor.  Removing my shoes and putting on red slippers and opening the door.  Why was there such a fanfare upon my arrival?  Was I a guest in their home?  I felt my identity was mistaken.  The owner of my school was a happy face and a generous soul.  Ready to overlook my faults.  She was cheerful and always padded the moment with laughter.  Her English was on the level of an infant, but she had plenty of servants to interpret for her.  She was the Queen and the school was her kingdom.  And I was a diplomat from a far away land read about in books, and seen in movies.  It was my first dive into Korea.
James and Jillian were rest stops along the way.  Places were I could stop and say, “what is going on? What does this mean? Why do they do this?”.  And I would get a Western mind’s explanation.  They were my fellow travelers.  James was a teacher from Tennessee and Jillian was a blonde from Oregon.  James gave me a small explanation of the schedule and a strategy for running the marathon.  After the brief in the war room, I was led into a class to observe how things would be conducted.After observing the teacher, it seemed like it would be a lot of fun and easy to manage.  After viewing several of these classes, I thought I would go out and explore unnoticed.  Soon I found a little monkey swinging on my leg….The morning classes I would be teaching were going to be fun: 6 – 8 year old students with a beautiful assistant helping in each class.
The morning was finished and our supervisor Mary wanted to treat us.  Nobly we rode in her car as honored guests.  Soon arriving at a Korean BBQ house near my apartment.  The restaurant had two sides: Western style tables and Korean style floor tables.  I voted Korean style, so we removed our shoes and sat on the square pillows.  It was painful sitting with my legs directly under my body.  Its a challenge if you have never done it.  Sitting on the floor is something Asians do naturally and is a healthy alternative to the chair. 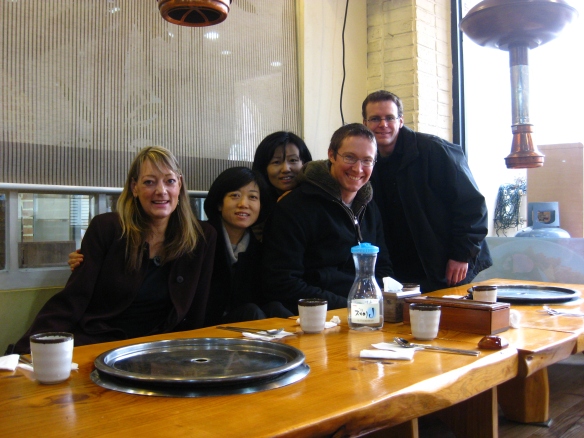 Mary called the waitress over and said something in Korean while we waited.  Soon an old face came to the table carrying a pink pile of pork and a metal tennis racket.  She turned on the gas and we waited for the red glow.  Mary laid the pork strips on the round racket as the smell of grilled meat filled the air.  Our mouths began watering- we were getting ready to eat Sam-gyup-sal 삼겹살.  This popular food is known as pork belly.  We took leaves of lettuce, placed a slice of garlic and dab of pepper paste inside followed by the cooked pork and ate like kings.  The rice was an excellent compliment.  We had seconds and thirds and then everything was gone.  I finished it all with a hot glass of water.  And like a stuffed turkey trying to stand up, I overcame gravity and balanced my way out the door.
We arrived back at the school and the leg of the race was about to start.  I thought it would be similar to what we had done in the morning, but I was simply introduced to the older class, given a book and the door was shut behind me.  Standing in a cage surrounded by chimpanzees, my thoughts were replaced with instinct.  I would stand my ground until the reinforcements arrived.  I looked for the lifeguard hoping she would see me…  drowning.  So I opened my book and began.
“What is this?! This is a cup!”, I proclaimed, hoping the sound of my voice would spell out authority.  Amidst the quiet roar of unfamiliar noises occasionally I was noticed and given a treat.  How could they be informed that what I came to bring to them was actually good and they should want it?  Hey kid, don’t you know that you’ll grow up someday and have to be responsible and learning to speak my language is good for you?!!  No response.  This mountain was big.  Where was my climbing gear?
Soon the referee burst through the door and sent the fighters to their respective corners.  We were given the rules again and then round #2 began.  I decided to put pencils in their hands and open their books in front of them, walking each child through the process of learning.  I asked a Korean teacher to have them draw their current state of emotion onto a piece of paper.

I had taught boys gymnastics before and that was a joy and a challenge, but this was another level of difficulty that I had not encountered.  How do you direct them, if they can’t understand what you are saying?  Puzzled looks, needing hearing devices.  Leaning in to listen to me.  Soon breaking focus and continuing down their river of conversations.  How could I pull them safely to the shore?  This would be a process of learning and trying new methods and making mistakes and repeating them over again.  “You can’t succeed until you fail”, that is what they say…  when you find yourself in the midst of your problems, don’t leave–there is a solution.

The day was over and I threw the weight off my back.  I flew out of that place and we took a deep breath.  The smell of cookies.  A woman in a cart frying chocolate cream pancakes.  How lucky was I?  The stress melted with hot brown oozing as I pulled it apart with my teeth.  I could eat these forever.  After the fourth one I felt sick to my stomach and woke from the dream. ^_^

It was good to have James around.  He had been there 8 months before Jillian and I had landed.  He was our flashlight.  He showed us where it was safe to jump in and places we should avoid.  Really, the amazing thing about South Korea is the crime rate.  It doesn’t exist.  Drugs are no where to be found and the culture of family is very strong.  Korea is an isolated place, cut off from the big bad world.  Its like going back to the 1950’s in America when you could leave your front door unlocked.  As we carried on, we found our way to a place called Grand Mart.  It was a competitor with other department stores like, E-Mart and Lotte Mart.  We wandered in and found interesting things:  A happy pig made of jade, a ring with a Buddhist cross, and Korean spam.  As well as a Korean tailor, Korean Tony the Tiger and a radio called “Pooty”. 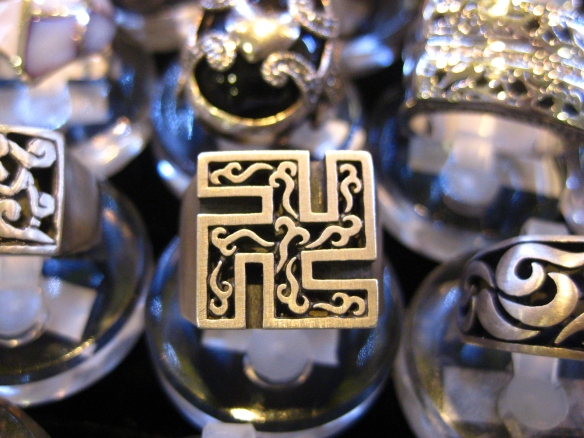 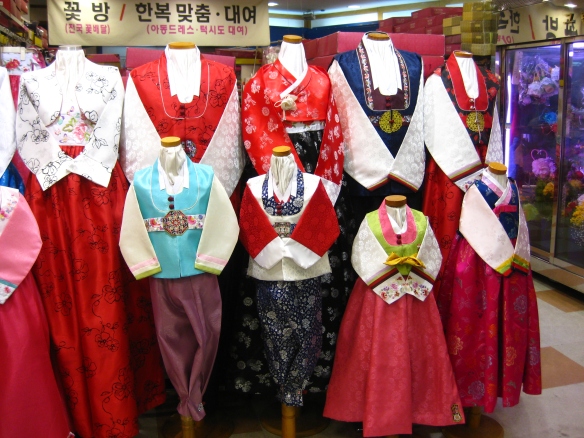 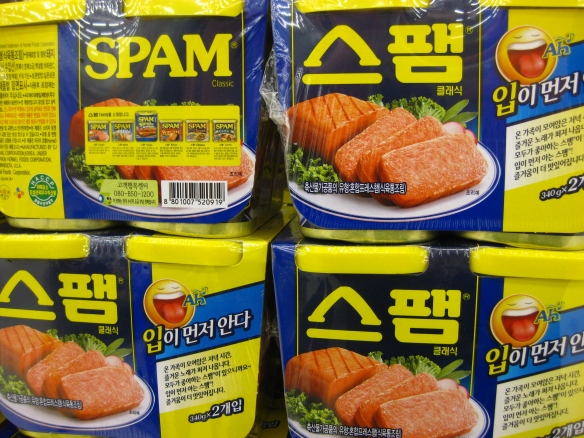 We made our way back outside and continued our conversation about our personal experiences and what had brought us to Korea.  It was an exciting time in life.  We were living an experience and no matter what the circumstances were, it would not be mundane. 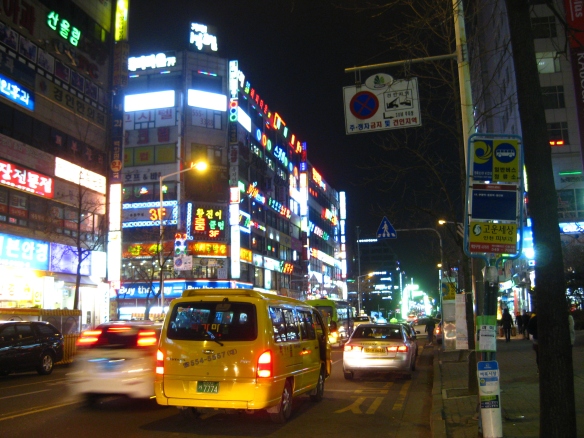 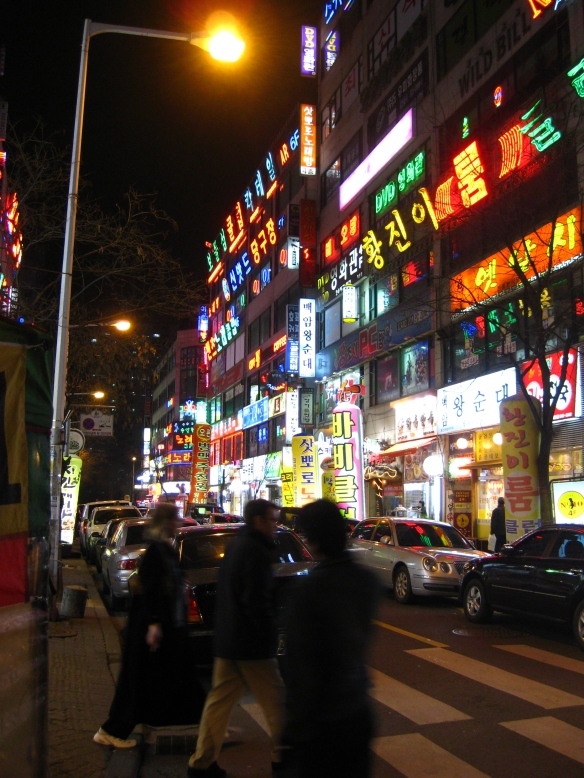 It was a frigid Monday and a holiday!  I timidly put one foot in front of the other and slid out the front door.  Slowly crawling into this strange world, becoming suddenly aware of the dark ocean around me.  Like black mops swinging and bouncing as they flowed by.  I looked closer.  It was the hair of many Asians.  My white Texas face shouted, “I’M NOT LIKE YOU.  I STICK OUT LIKE A SORE THUMB!”  The walls of my room could no longer shield me from the eyes of the passers by.  Like the points of needles, I felt their stares as I swallowed the discomfort.  I grasped my way into a small restaurant squeezing out the words,”nang-myun chuseyo.” as if their ears were made of delicate ceramic.  I poured into the nearest chair.  Time seemed to stop, until a smile greeted me carrying a spicy bowl of noodles and ice.  She called it, “Nang-myun 냉면”, meaning “cold noodle”.  The circular bowl was unfamiliar. Inside of it, I found sesame seeds floating on ice, slices of green cucumber, half-circles of Asian Pear topped with a slice of boiled egg and a strip of meat.  Underneath it all, strings of noodles wrapped in a bun keeping everything afloat.
My stomach was going to burst as I hobbled around the block and explored more of the neighborhood.  I could barely speak to anyone.  If I got lost, I didn’t know the address to my apartment!  I didn’t know the name of my school!  I walked down blocks of gray square buildings laced with neon.  I must remember the path I had taken.  Loud music playing and smoky restaurants open to the street.  Coffee shops on every corner.  Asian faces warmly bundled.  Occasionally seeing the familiar.  A 7-Eleven!  O thank heaven!  The 7-Elevens were 24 hour, just like the West.  Soon upon entering, the familiarity was gone.  Things like black bean milk and squid jerkey hanging in the isles.  The bean drink was known as “Kaman-kong (까만콩)”.  It was refreshing!
I found the road back to my apartment after navigating the high seas, but upon returning, I noticed rectangular buildings lit up like Christmas trees.  Some were castles, some looked like alien space ships.  These buildings were hiding a secret.  I could see myself in the lipstick red tiles, as I stood outside, pondering in the glow of their radiance.  What was the intention of these bright buildings?  The structures beckoned me to come inside, but I played it safe and stayed warm in my bed that night. 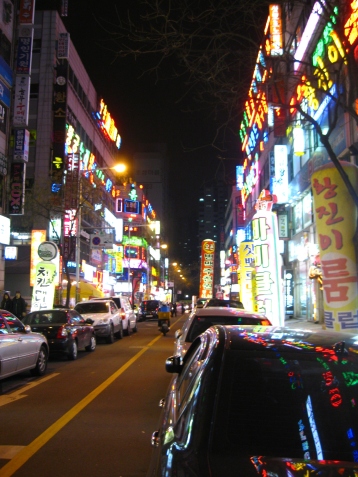 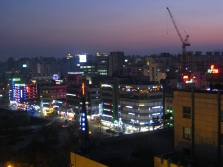 a view of my city 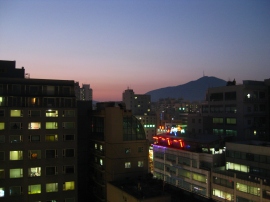 a mountain waits to be conquered… 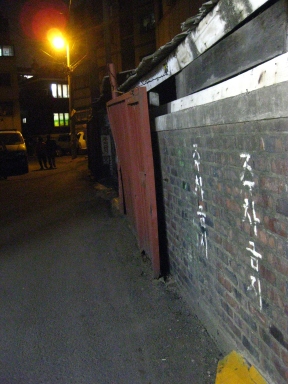 a dark alley beckons me

its not a swastika!

a home for the Happy Korean

this market will be busy in the morning…